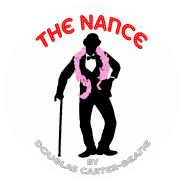 In the 1930s, burlesque impresarios welcomed hilarious comics of vaudeville to their niche. A headliner called ‘the Nance’ was a camp homosexual and master of double entendre. ‘The Nance’ is the tale of Chauncey Miles, a master performer in a time when it is easy to play gay and dangerous to be gay.

This production is for audience members 16 and over, as it contains adult themes and brief nudity.